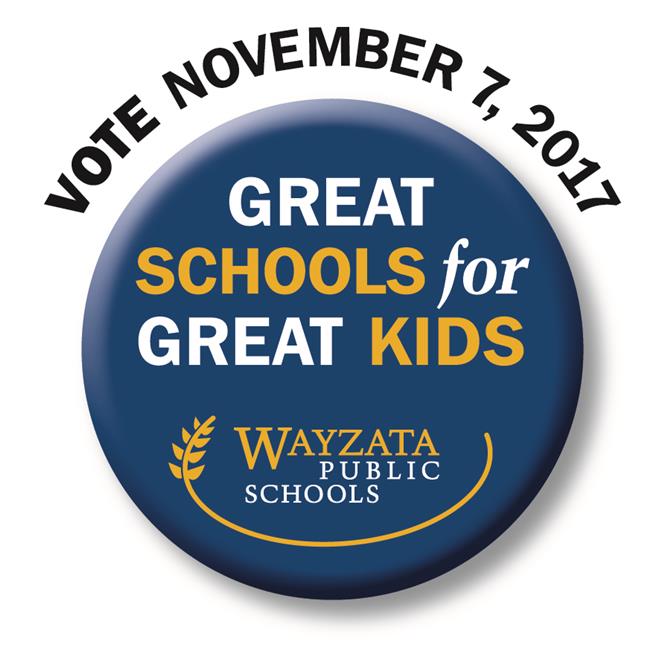 “We are incredibly grateful to our community for their support of our more than 11,000 students and 1,600 staff through these yes votes,” said Superintendent Chace Anderson. “These voter-approved funds are investments in our community’s future and will support our commitment to excellence for each and every student.”

*Results are unofficial until canvassed by the Wayzata School Board on November 13, 2017.

After months of reviewing enrollment and budget data, working with community-based enrollment growth and finance advisory groups and assessing how best to maintain the Wayzata Public Schools commitment to academic excellence, the Wayzata School Board has approved placing three school funding requests on a November 7, 2017 ballot:

"We work hard to be financially prudent on behalf of our students and our community," said Wayzata School Board Chair Chris McCullough. "These funding requests are in response to our growing enrollment and based on the advice of our Citizen's Finance Advisory Council and a community-based Growth Task Force. Our goal is to maintain the academic excellence our community expects and our students deserve, while always being mindful of and sensitive to the concerns of our taxpayers."

If all three requests are approved by voters in November, the tax impact on an average homeowner ($350,000 home) would be less than $15 per month.

Prior to making the decision to place the funding requests on the ballot, the School Board reviewed the following information presented by Superintendent Chace Anderson:

Technology for Teaching and Learning

If all three requests are approved by voters, the tax impact on an average homeowner ($350,000 home) would be less than $15 per month.

Absentee and early voting is available in person starting September 22:
You no longer need a special reason to vote absentee or take advantage of early voting.

Print and complete an absentee ballot application and return it to Hennepin County as noted on the second page by mail, email or fax.

Mail your ballot back in the pre-paid, pre-addressed envelope that was provided with your ballot materials.

Learn more about voting – including how to register – at www.mnvotes.org.

For nearly a year, community-based enrollment growth and finance advisory groups have been working with district staff to analyze what students, staff and the schools need to maintain an excellent educational experience. The combination of enrollment growth, inadequate state funding and increasing costs led the School Board to unanimously approve placing three school funding requests on the November 7, 2017 ballot.

Some additional context for the decision:

In addition to school board races, there will be three school funding requests:

Question 2: Approve bond funding to address the district's growth and facilities needs for:

Capacity: Build a new elementary school and enlarge the school cafeteria and food service areas at Central Middle School, the largest of the three middle schools.

Question 3: Renew the technology levy to help maintain technology for students and staff to provide a personalized education and access to real-time educational resources

Demand for our schools has never been greater. If current housing trends continue, WPS can expect approximately another 1,000 new students K-12 by 2019. New housing developments are going up 2-3 times more rapidly than developers had projected in the north, and there is continued growth in the southern part of the district as older homes turnover to young families.

Wayzata's operating levy is lower than most neighboring districts and nearly $500 less per student than the maximum amount allowed by state law. 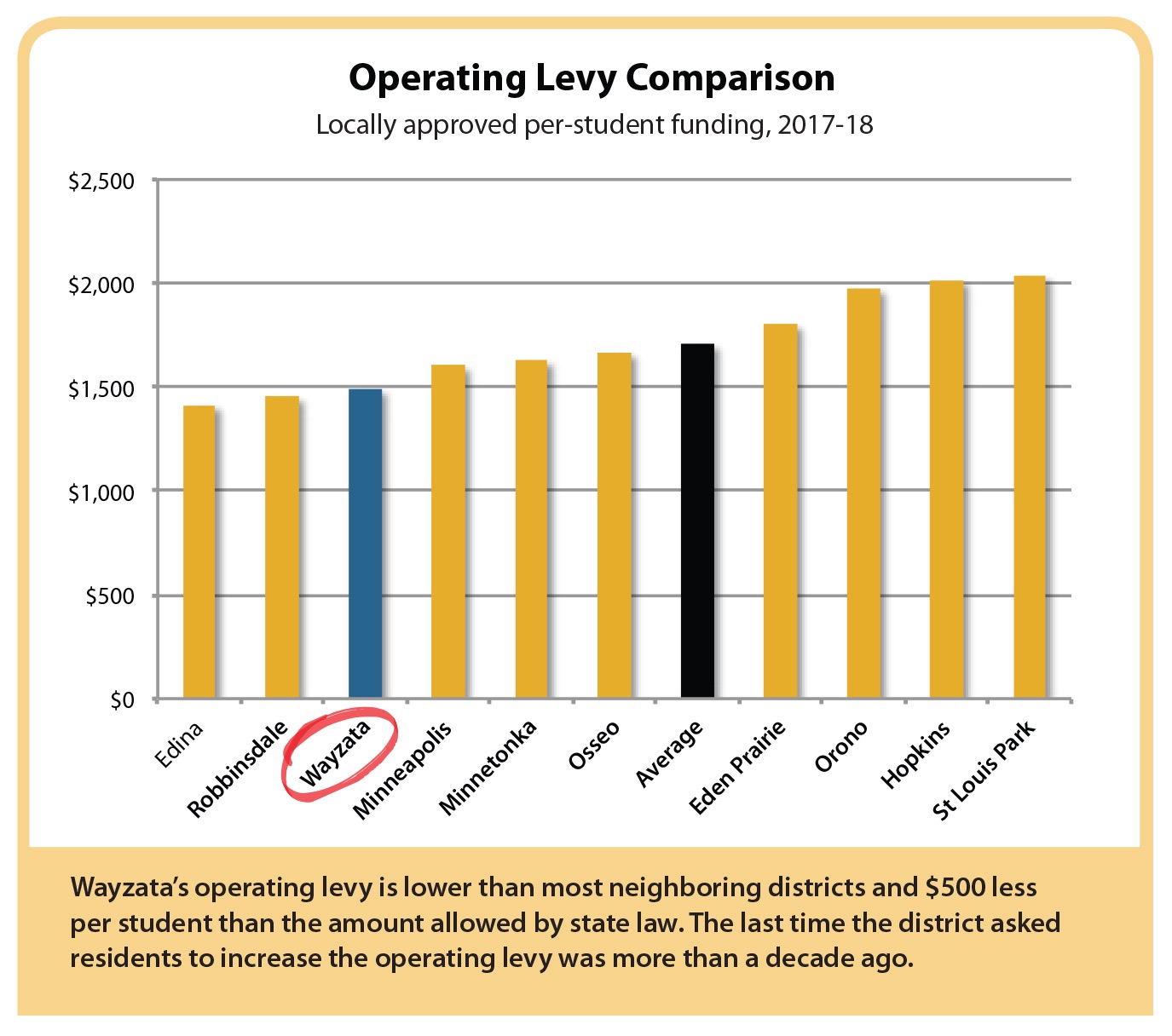 Wayzata Public Schools has cut $16 million in the past eight years. The district has done its best to keep cuts away from the classroom, but that becomes increasingly difficult. State education funding has not kept up with inflation, nor with increasing educational costs and needs. Inadequate funding is putting increased pressure on the district's operating budget, which funds teachers, classrooms and other district operating costs. 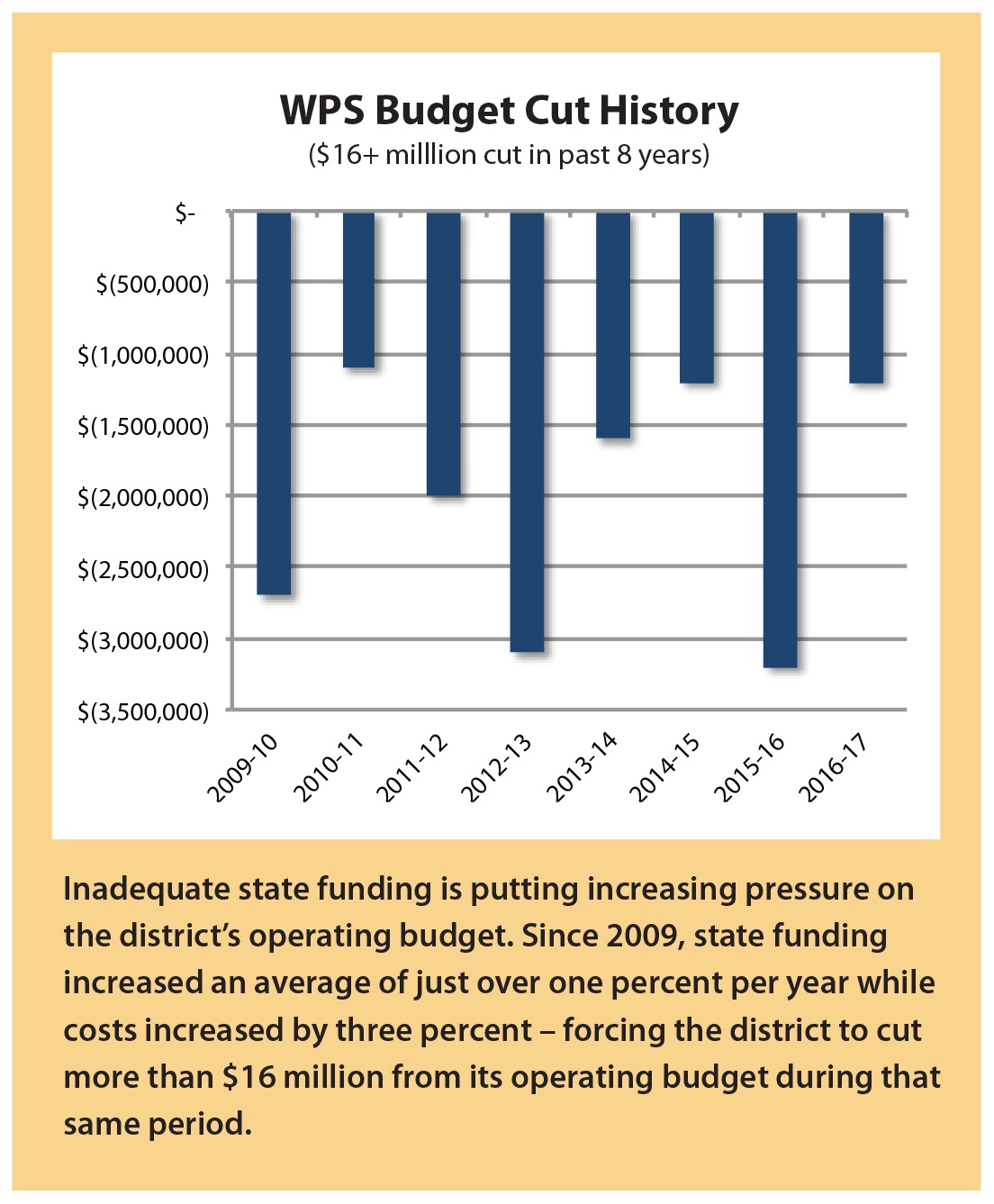 If all three questions are not approved by voters:

The district would face annual budget cuts of $1 million or more, impacting staff and programs districtwide.

If all three requests are approved by voters, the tax impact on an average homeowner ($350,000 home) would be less than $15 per month.

Yes, thanks to voter support in February 2014, we were able to build and open Meadow Ridge elementary school. Even though we opened Meadow Ridge in fall 2016, made boundary adjustments to right-size all our elementary schools in fall 2016 and will open an addition to Meadow Ridge in fall 2018 - we still need to add capacity at the elementary level to accommodate resident student growth. This is due to new housing developments that are going up 2-3 times more rapidly than developers had projected in the north, and continued growth in the southern part of the district as older homes turn over to young families. We are being as prudent and planful as possible, but demand for our schools from current and new residents is greater than ever before. The result is that our elementary buildings are already over capacity. Without a new elementary school, existing elementaries would become more crowded and class sizes would increase. The resident student growth is real and will continue to present space challenges.

By law, there are restrictions on how various types of school district revenue can be used. Essentially, bonds are for building and levies are for learning.

The bond funding in 2014 was also to address student enrollment growth primarily by expanding Wayzata High School and building a new elementary school, Meadow Ridge. Thanks to the high school addition, we anticipate there should be adequate space there for several years. However, even though we opened Meadow Ridge in fall 2016, made boundary adjustments to right-size all our elementary schools in fall 2016 and will open an addition to Meadow Ridge in fall 2018 - we still need to add capacity at the elementary level to accommodate resident student growth. This is due to new housing developments that are going up 2-3 times more rapidly than developers had projected in the north, and continued growth in the southern part of the district as older homes turn over to young families. Read more about elementary growth above in Question 8.

The $16 million was a combination of budget cuts, modifications and adjustments that were due to educational expenses and inflation outpacing both state and local revenue, as well as increasing student needs.

School districts in Minnesota rely heavily on state funding for the annual revenue that finances education. A school district is very limited in its ability to increase revenue sources. In the Wayzata school district, the school board and community demand that the administration operate prudently in financial matters and that translates into balancing the District's expenditures with its revenues.

The District works hard to achieve the community's operational objectives without significantly impacting direct student classroom instruction by using a number of strategies to balance the District's general fund budget. These budget balancing strategies have included:

While the 2017 legislature provided 2% new revenue to the District for the next two years, that did not meet increasing expenditures nor did it make up for several years of little or no funding increases from the state. The result: an annual $1 million shortfall in the general fund budget for the foreseeable future. It is important to note that had the legislature provided at least a 3% increase in revenue over the last eight years, the District could be directing almost $16 million in additional resources to direct student instruction.

The district recently purchased land that could be used for a ninth elementary school if voters approve funding this fall. The land is located in Plymouth, north of 55 and east of County Road 101 N. A portion of the property, formerly owned by Speak the Word Church, could be used for a ninth school. The city of Plymouth has approved residential housing for the remaining portion of the property.